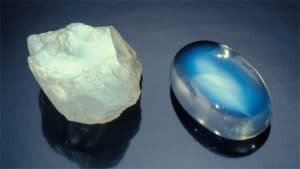 According to Hindu mythology, moonstone is made of solidified moonbeams. Many other cultures also associate this gem with moonlight, and it’s easy to see why. Its internal structure scatters the light that strikes it, creating a phenomenon known as adularescence. The visual effect is reminiscent of the full moon shining through a veil of thin, high clouds and legend has it that moonstones brings good luck.

Adularescent moonstone was once called “adularia.” The name originated with a city in Switzerland, Mt. Adular (now St. Gotthard), that was one of the first sources of fine-quality moonstone.

During the 1960s “flower child” movement, moonstone provided its wearers with the desired ethereal look, and designers of the 1990s New Age movement again turned to moonstone’s natural beauty for inspiration.

Feldspars are the most widespread minerals in the earth’s crust, making up about 60% of its rocky coating. You can pick up a rock anywhere in the world, and you’ll probably find that it contains a mineral or two from the feldspar group. Moonstone’s delicate beauty and its long-established heritage make it perhaps the most familiar gem-quality member of the feldspar group.

Moonstone is a variety of the feldspar-group mineral orthoclase. It’s composed of two feldspar minerals, orthoclase and albite. At first, the two minerals are intermingled. Then, as the newly formed mineral cools, the intergrown orthoclase and albite separate into stacked, alternating layers.

When light falls between these thin, flat layers, it scatters in many directions, producing the phenomenon called adularescence. Adularescence is the light that appears to billow across a gemstone, giving its surface a glowing appearance. Perhaps the most captivating aspect of adularescence is its appearance of motion. The misty light seems to roll across the gem’s surface as you change the viewing angle.

Another feldspar mineral that displays adularescence is a labradorite feldspar found mainly in Labrador, Canada. Another labradorite—found in Madagascar—has a multicolored adularescence over a light bodycolor. It’s known in the trade as rainbow moonstone, despite the fact that it’s actually a variety of labradorite rather than orthoclase. 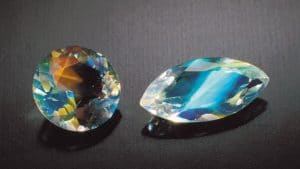 Throughout its long history, many people have agreed on the qualities moonstones should ideally display:

• Color: Moonstones should be colorless.
• Transparency: Semitransparent to nearly transparent is preferred for moonstones.
• Purity: There should be no inclusions in the stone or they should be hidden with the cut.
• Adularescence: Ideally, the adularescense should be a vivid blue that is known in the industry as blue sheen.

The finest moonstone is a gem of glassy purity with a mobile, electric blue shimmer. Bodycolor should be nearly colorless and free of any yellowish, brownish, or unattractive green tints. The sheen should be centered on the top of a cabochon, and it should be easily seen from a wide range of viewing angles. If a moonstone’s adularescence is only visible within a restricted viewing range, its value drops. 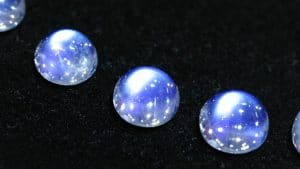 A good moonstone should be almost transparent and as free of inclusions as possible, since these inclusions can potentially interfere with the adularescence. The most typical moonstone inclusions are tiny tension cracks called centipedes. They are called this because they resemble those long, thin creatures with many legs.

Moonstone might be shaped into beads for strands, but by far the most common cutting style is the cabochon, a form that displays its phenomenal color or colors to best advantage. Moonstone cabochons are usually oval, but cutters sometimes offer cabochons in interesting shapes, such as the tapered sugarloaf—an angular cabochon with a square base.

If a moonstone is cut as a cabochon, the dimensions should be uniform, and the profile should not be too flat. Very flat cabochons don’t display sheen well and have little value.

Faceted moonstones have become increasingly common. The cut heightens brilliance and tends to hide any inclusions that might be present. 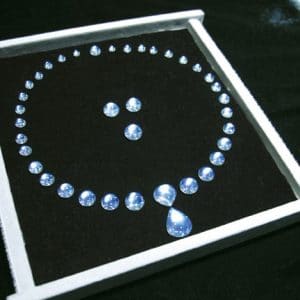 Moonstone comes in a wide range of sizes and carat weights. Unfortunately, fine-quality material is becoming scarcer in larger sizes.

Interested in moonstones? We would love to talk jewelry and find you a piece you would love! Please feel free to contact us.

My family has bought all of our jewelry and had repairs done at Brittany’s for years. They are knowledgeable and very honest. I have recommended them to others in the past and will continue to do so. Keep up the great work.