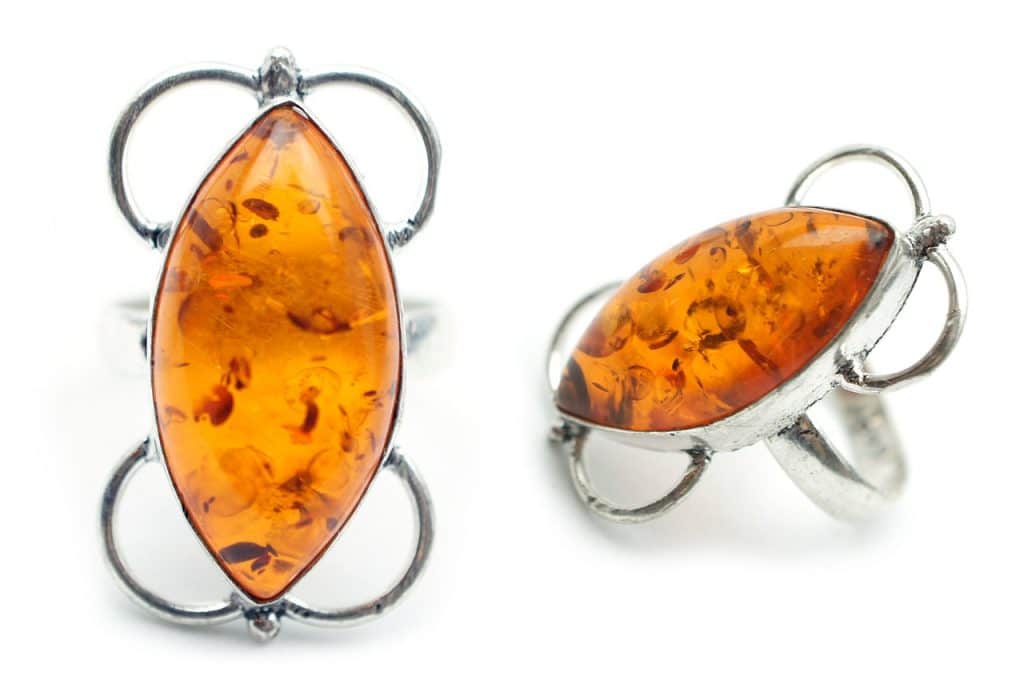 Amber is an organic gem which are the products of living or once-living organisms and biological processes. Millions of years ago as amber oozed from plants the substance acted as a sticky trap for ants, bees, termites, and other insects and fossilized over time.

Other typical inclusions are parts of flowers, leaves, and pine needles, along with gas bubbles.
Sometimes these inclusions can be seen in the rough, unpolished stone.

Insects embedded in amber formed the basis of the movie “Jurassic Park.” The story centered on scientists using DNA found in dinosaur blood that had been preserved by a prehistoric mosquito trapped in amber to clone dinosaurs. Due to this,the movie generated a lot of interest in the gem.

Scientists and gem collectors treasure amber that contains suspended animal or plant fragments. These fossilized bits of once-living things were trapped in the hardening substance, creating a fascinating time capsule, especially in a gem like the one pictured above that contains a lizard that is now extinct. Gems containing larger animals like scorpions, snails, frogs, and lizards can be very valuable—especially if the animal “inclusions” are preserved intact. Gas bubbles are very common inclusions however, if there are a lot of them they can give the material a cloudy appearance. Transparent amber is more valuable than cloudy material but an interesting plant or animal inclusion can add hundreds to thousands of dollars to its value. 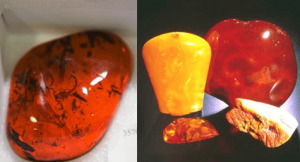 Amber comes in more colors than just yellow and gold. It might also be white, yellow, and orange to reddish brown. Gem collectors value reddish stones more than their golden counterparts and rare pieces can even be blue or green. Pieces which show an attractive bluish or greenish fluorescence can be highly valuable

The stone is surprisingly light: in fact, it will float in a saturated salt solution—but not in ordinary seawater. This makes it suitable for large beads or pendants that are still comfortable to wear despite their size.

Cut is typically less important for this stone as most are polished in free-form shapes, cabochons, beads or might be carved. In rare cases, very transparent material might be faceted for collectors. 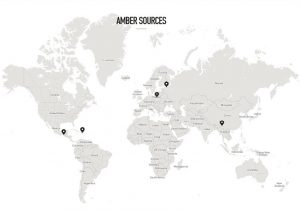 Some types of amber are found in the ground. Other types have been freed and carried by tides, ending up on beaches or near-shore areas. The Baltic coast bordering Germany, Poland, and Russia is still an important source of the gem and this type is generally more expensive than those found in the Dominican. Pieces containing insect or plant inclusions fetch higher prices than clean pieces without such inclusions. For example, those with no insect inclusions cost only a few dollars per piece, while pieces with easily seen or complete insect or plant specimens might sell for thousands of dollars.

Like amber, copal is fossilized tree resin, but it is not as old. Amber must be over a million years old, while copal is younger—often only around a hundred thousand years old. In fact, the oldest specimen ever found was from the Upper Carboniferous Period, dating back approximately 320 million years.

Amber is sometimes called the “gold of the North.” Its warm luster is featured in beads, carvings, pendants, and cabochons, as well as decorative items like cups, bowls, snuff boxes, and umbrella handles.

If you have any questions about this unique stone please feel free to contact us! One of our knowledgeable staff will be happy to give you any information they have and help you find jewelry you will love.

Sheryl A.
View Our Jewelry Collections